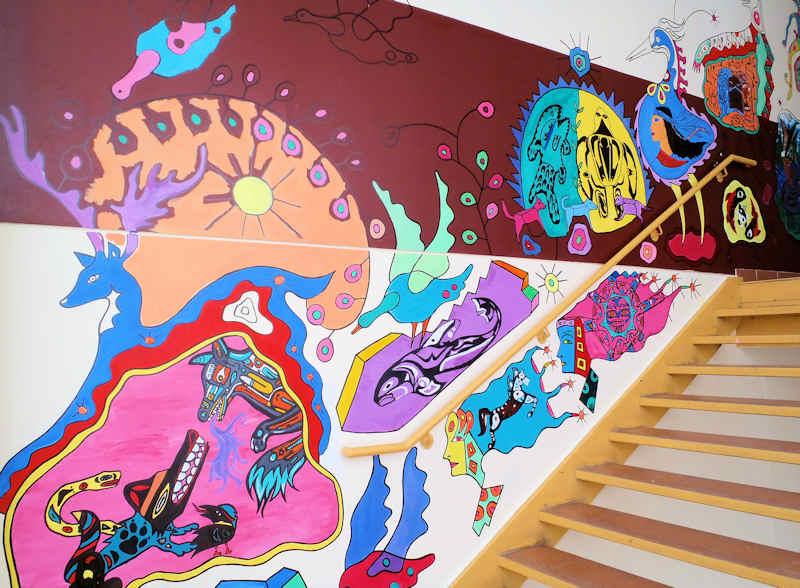 "Flying Through the Veil"

On February 27, 28 and 29, 2012 I worked on a mural project at Symmes Junior High School with the collaboration of art teacher and friend Sylvia Bretzloff. We have done several projects together in last few years and the experience is always very exciting. On one of the occasions working there I came across one of her many books on native art and we thought it would be a great idea to do a mural honouring Canada first nations. As always, the students were very well prepared for this project, having selected and drawn many interesting images inspired on first nation's art. We later encouraged them to step out of the box by infusing these images with their own personal touches and interpretations. The setting for this project (a staircase) was very special given the fact that it already contained an installation of flying geese hanging from the ceiling, and a saying written on the wall about people being like stained glass. I tried to harmonize these influences by drawing many geese flying on the wall and having many references to people such as faces and masks in the background. The project took on a life of it's own once the students started on it. The title of the video comes from a comment made by Sylvia's sister Carol, who thought we had steeped into a metaphysical dimension and had truly connected to the native spirit of Art, and therefore it was called "Flying Through the Veil". Bravo to all participants!! Enjoy the video! Marcio Melo